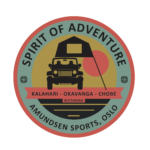 New morning, new wake-up call. Lions was swapped by hippos of the Okavanga delta. A roaring combination of grunts and murmurings harmonised our breakfast preparations. Today we had an exciting day ahead of us as we were heading into the Chobe National Park.

Chobe is known for having “the largest concentration of wild animals on the African continent”, spread across 12.000km² of deltas, savannah’s and tropical forests. It is also the first National Park that was established in Botswana back in 1967. Today’s leg was straight North from Kwai, into Chobe and towards the reserved area of Savuti.

Before heading into Chobe we had a “mokoro” (dug out canoe) trip planned with two locals that grew up along the Okavanga Delta. It was fascinating story-telling to hear about the diverse animal life and nonetheless the amount of respect they have for their surrounding nature. Dr. Moss and his companion Sensevo brought us out on the delta’s as 50+ elephants emerged from the forest and crossed the river right in front of us. We sat still for 10 minutes as they crossed and disappeared into the forest. It is astonishing to witness these creatures up close, and how silently six tonns can move across the plains. 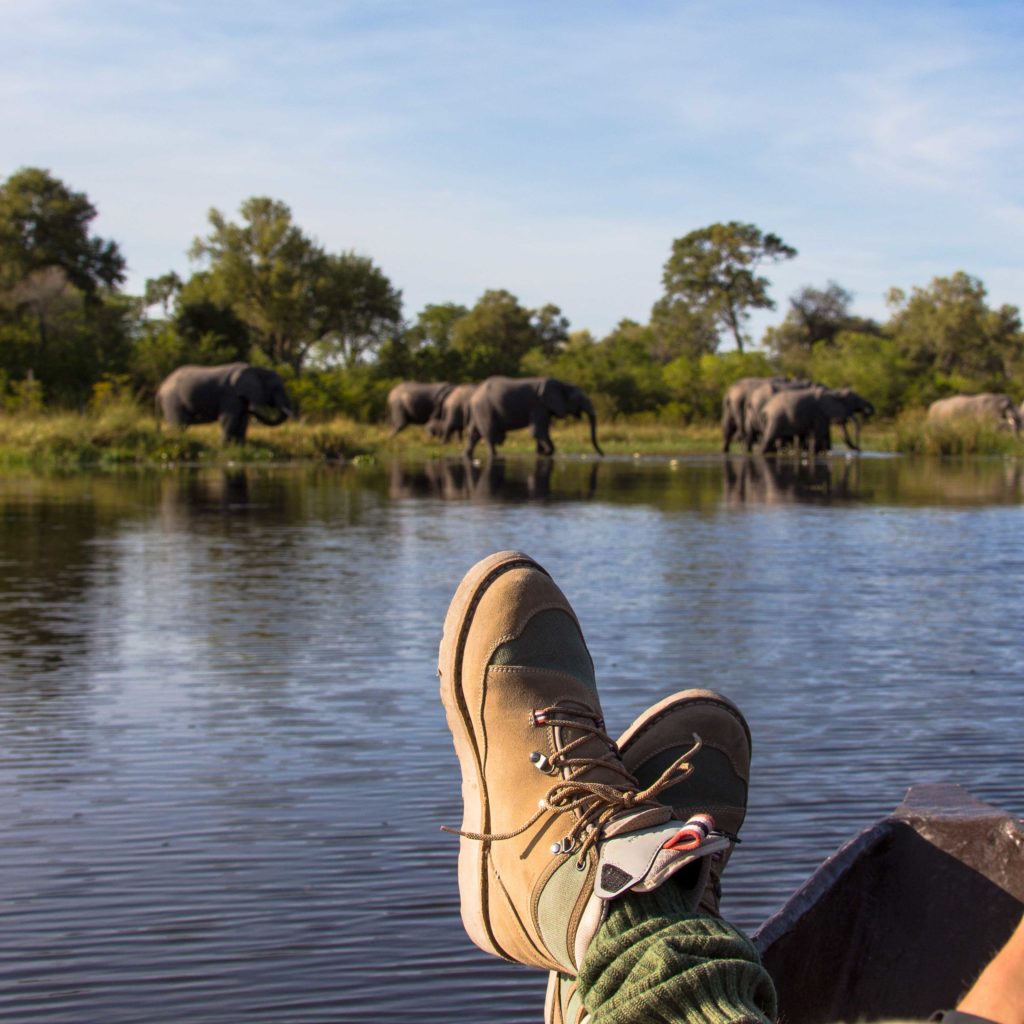 Postcard: Our new Safari Mucks in it’s preferred habitat as the elephants cross the swamp

Following along the delta we got up close with a couple of water bucks before a male hippo appeared. As we watched from distance, Dr. Moss and Sensevo told us fascinating facts while constantly ensuring that we wouldn’t stir the daily routine of the hippo. Tying back to the theme of eco-tourism from yesterday, we saw that in practice today. The animals have first priority, and in many ways stand’s on top of the hierarchy to live their lives freely. This is not the way to build a booming tourist industry, but a sustainable one to ensure that these animals will still be here 100 years from now. The memories from this morning will stick with us forever. 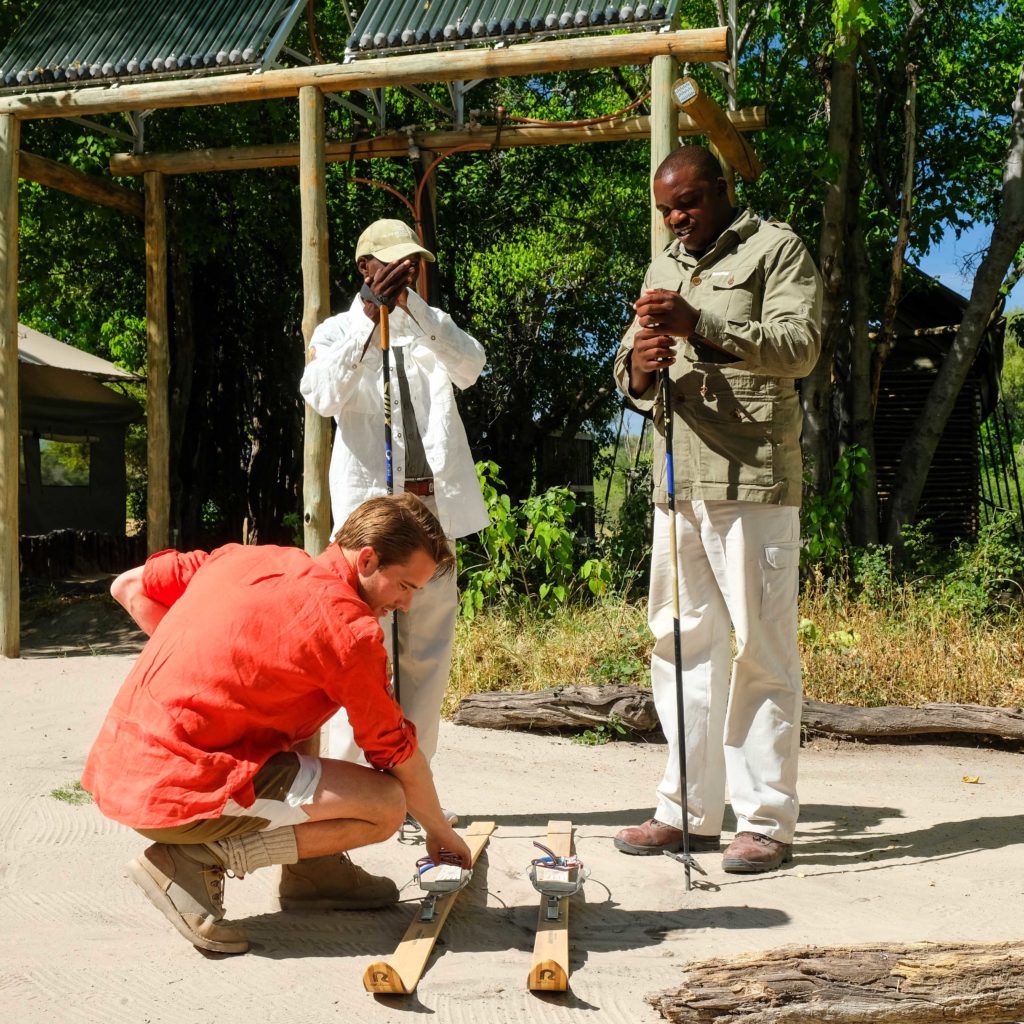 Postcard: JC holding a “crash-course” in nordic skiing on sand

We packed up our cars in Kwai and got ready for 100km towards Savuti and the Chobe National Park. Already we have gotten to see a varied nature and several different faunas. Moving along from Kwai and deltas’s, the savannahs started to unfold themselves again. The roads are becoming more sandy and slower as we move North. The color is also turning more and more red, which we have heard from before as one of the beauties of Chobe. Since we entered the game reserve our senses have been tuned to spot animals. You can easily drive past a pack of animals without noticing if you don’t pay attention. Erik suddenly stopped the car in front of us as he points to the right. A White Rhino was grassing right by us as we are able to spot him for a few seconds before she or he disappeared behind vegetation. 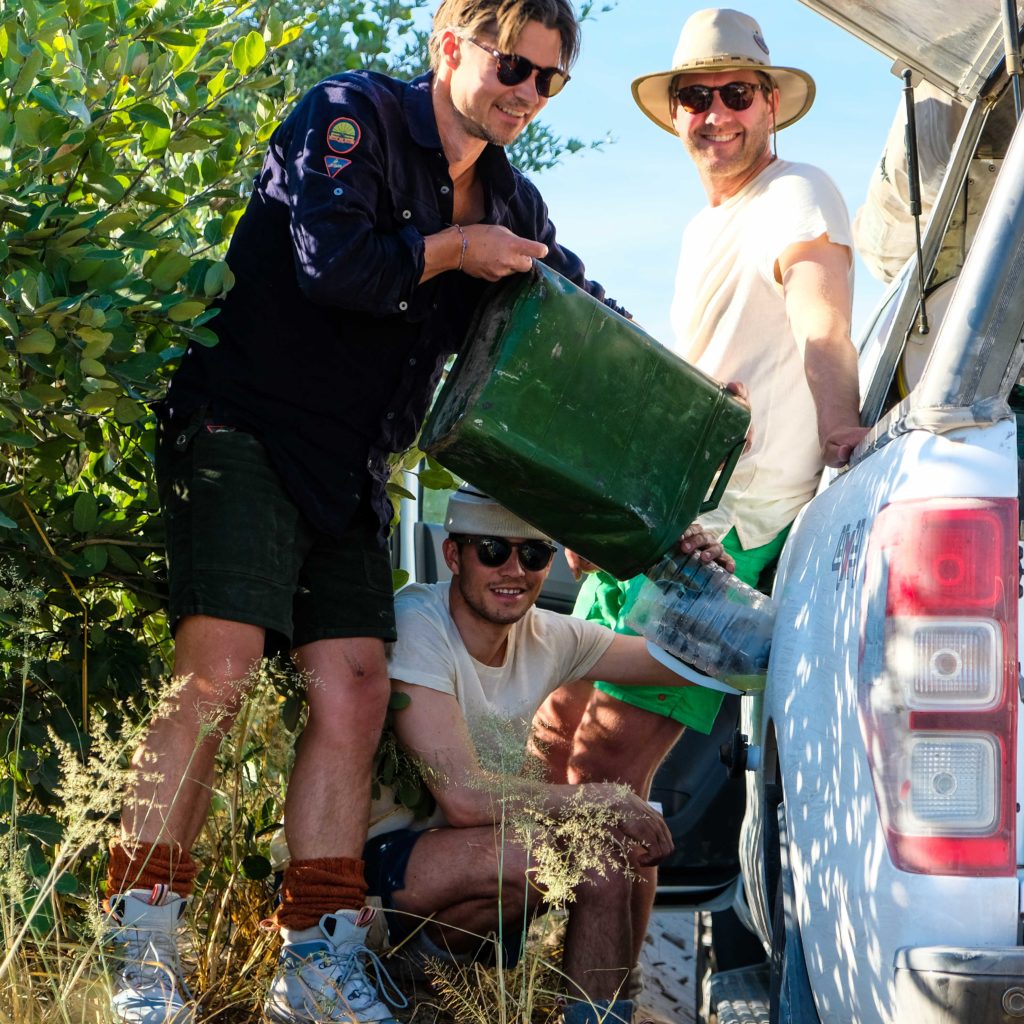 Postcard: Fuelling up halfway between Kwai and Savuti

In the afternoon we rolled into Savuti, one of the most famous unfenced camping areas in Chobe. A red-billed hornbill (similar to Zazu from The Lion King), joined our camp as we installed ourselves for the night. We have eased into the life on dirt roads with roof top tents and South African beef jerky as our best companions.

Tonight we are preparing 1,5kg of South African sirloin, well in time after a long day on the road. As we sat down for dinner, lions close by started a roaring orchestra. I don’t think we will ever get used to the sound, and it gives you a reminder for who’s the ruler of the savannah.

Saying good night from our camp in Savuti. Tomorrow we will be arranging a biathlon ski race on sand before we head further into the deep of Chobe National Park. Stay tuned!